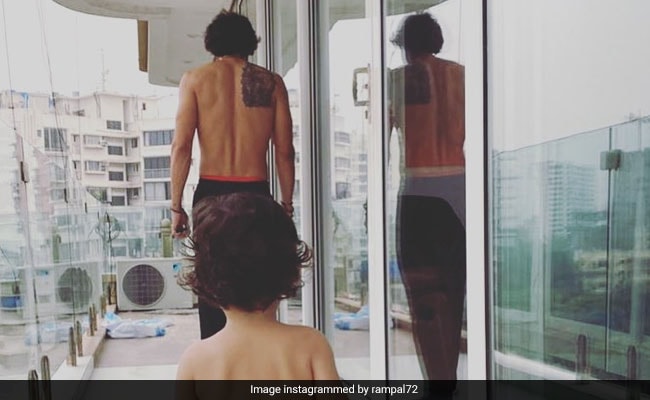 Arjun Rampal’s girlfriend Gabriella Demetriades loves his latest Instagram entry, also featuring their little son Arik. The actor, on Wednesday, posted a really adorable photo of himself and Arik, in which Arjun and the little munchkin’s uncanny resemblance stole the show on the Internet. Arjun, while sharing the picture, captioned it in the best way possible. He wrote: “Mini me.” Reacting to the photo, Gabriella Demetriades dropped a black heart in the comments section. The actor’s fans also flooded the post with comments such as “too cute” and “carbon copy.” Arjun Rampal and Gabriella welcomed Arik on July 18 last year.

And take a look at Gabriella Demetriades’ comment here:

Just a few days ago, Gabriella posted a loved-up picture of herself and Arjun Rampal that received a whole lot of love on social media. Here’s the photo we are talking about:

Meanwhile, check out some more cute photos of Arjun Rampal, Gabriella Demetriades and their son Arik.

In terms of work, Arjun Rampal was last seen in the web-series The Final Call. He has featured in a number of films such as Paltan, Dil Hai Tumhaara, Asambhav, D-Day, Chakravyuh, Inkaar, Om Shanti Om, Rock On!, Housefull, Raajneeti and Ra.One, in which he co-starred with Shah Rukh Khan. The actor will next be seen in Zee5’s courtroom-drama Nail Polish, which will also feature Manav Kaul.

Gabriella is a South African model and actress, who has featured in the 2014 Hindi film Sonali Cable and the 2016 Telugu movie Oopiri.

DDLJ Through The Eyes Of Aamir Khan. Here’s What The Actor Tweeted About The Film