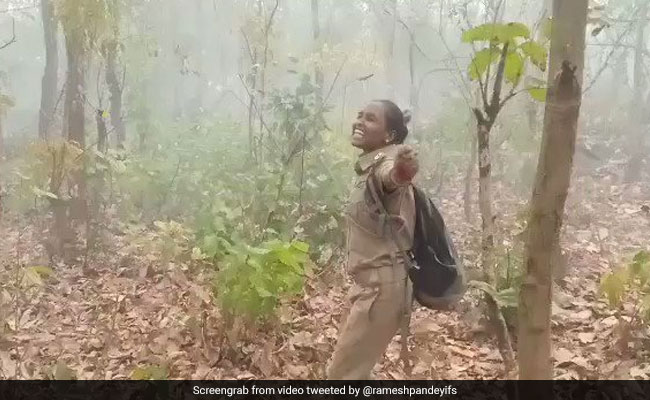 A forest officer dances in the rain in Odisha.

Footage of a woman forest officer dancing in the rain in Odisha’s Similipal is winning hearts on social media. Sneha Dhal was filmed dancing in the downpour, hands outstretched and a big smile on her face, celebrating the welcome arrival of rain after raging wildfires destroyed large tracts of the Simlipal National Park over the course of more than two weeks. “Give us more rain,” Ms Dhal was heard saying in the video.

According to Dr Yugal Kishore Mohanta, who shared the footage on Twitter, Ms Dhal was “finally happy” with the arrival of rain after being involved in firefighting efforts at the forest.

The footage was also shared by senior IFS officer Ramesh Pandey, who shared that as per the current MODIS satellite data, the fire has been brought under control.

Such rains are like helping hands of God. One can see the happiness of lady forester involved in firefighting in Similipal, Odisha. Good news is that fire is under control as per the current MODIS satellite data.
Via @ykmohantapic.twitter.com/6RVagrCxQz

The video has been viewed more than 1.7 lakh times on the microblogging platform.

Her happiness is infectious ????

The Odisha government on Tuesday claimed that no life was lost in the forest fire and that 95 per cent of the fire points have been extinguished or at least attended to.

Union Environment Minister Prakash Javadekar on Wednesday also said a committee of experts is being sent to help the state government manage incidents of forest fires.