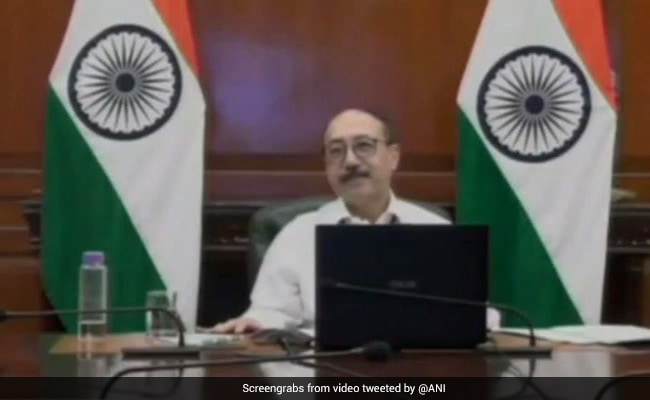 Harsh Vardhan Shringla says Indo-Pacific is all about looking at what are your options. (File)

The COVID-19 pandemic and Brexit are both “game changers” that have forced countries to think very carefully about geopolitical aspirations and how they define the course of future economic and political energies, Foreign Secretary Harsh Vardhan Shringla said in London on Tuesday.

Addressing the Policy Exchange think tank on the topic of “India’s Vision of the Indo-Pacific”, the senior official also expressed the hope that the UK would follow France, the Netherlands and Germany in finalising its Indo-Pacific strategy in keeping with a definitive shift in the global economic trajectory from the Atlantic to the Indo-Pacific.

“Both are gamechangers… Brexit has meant both Europe and the United Kingdom have to look at redefining their relationships with their principle partners all over again. We see this as a unique opportunity to redefine and reset our ties with the UK,” said Mr Shringla, addressing questions with Lord Jo Johnson at the end of his speech.

“The Indo-Pacific is all about looking at what are your options… We would like the UK to come in as a major investor and innovation partner; a range of activities in the digital and cyber age which may not have been even possible to conceive earlier,” he said.

Highlighting that India has not just mainstreamed the expression “Indo-Pacific” but also encouraged countries to perceive and define the region to its full extent – as the vast maritime space stretching from the western coast of North America to the eastern shores of Africa.

“For us, and for many others, the shift in the economic trajectory from the Atlantic to the Indo-Pacific has been hugely consequential. The rise of China and the imperative for a global rebalancing have added to the mix. A rules-based international order is achievable only with a rules-based Indo-Pacific,” the Foreign Secretary said.

In November 2017, India, Japan, the US and Australia gave shape to the long-pending proposal of setting up the “Quad” to develop a new strategy to keep the critical sea routes in the Indo-Pacific free of any influence.

Mr Shringla described the Indo-Pacific as the 21st century’s “indisputable” locus of political and security concerns and competition, of growth and development, and of technology incubation and innovation.

“That is why a country like Germany, physically distant but an economic stakeholder in the Indo-Pacific, has released a strategy for the region. After France and the Netherlands, it is the third European country to do so… The UK, we hope and expect, will be next on the list, and too will finalise its Indo-Pacific strategy soon,” he said.

Without naming any country specifically, he stressed on the need to secure end-to-end supply chains in the region, with no “disproportionate dependence” on a single country.

“An Indo-Pacific guided by norms and governed by rules, with freedom of navigation, open connectivity, and respect for the territorial integrity and sovereignty of all states, is an article of faith for India,” he said.

Mr Shringla arrived in London for the final leg of his European tour preceded by visits to France and Germany. In London, he has talks scheduled with officials at the Foreign, Commonwealth and Development Office (FCDO) as well as a series of engagements.

“Reached London for a 33-hour, 9-engagement visit, entailing talks with the British Foreign Office leadership and meetings with ministers, key officials, MPs, business, media and the strategic community. In post-coronavirus world, the India-UK vaccine partnership will come up,” he said in a statement on Twitter.

“From climate change to greater mobility for Indian talent, from shared approaches to terrorism to bringing white-collar criminals to justice, India and the UK have much to work on. Will share India’s outlook on tech and development, digital frontiers and the Indo-Pacific Region,” he said.

The Indian High Commission in London said the Foreign Secretary’s visit to the UK, “despite the limitations posed by COVID-19”, shows India’s commitment to international engagement and diplomatic outreach.