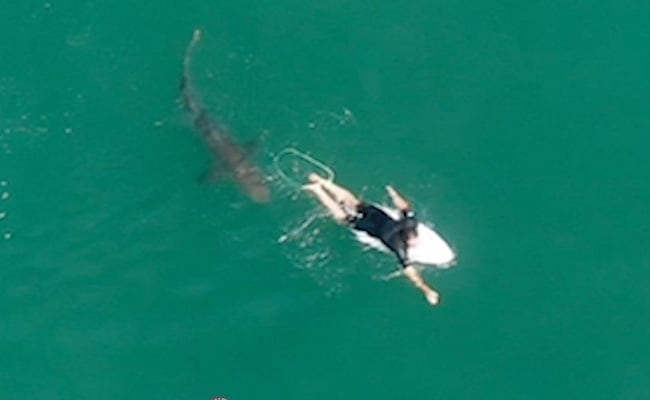 A dramatic close encounter between Australian world championship surfer Matt Wilkinson and a shark off the east coast of the country was captured by a drone, showing the shark circle him, close in and then dart away from his feet.

Wilkinson was paddling in from a surf at Sharpes Beach, 733 km (455 miles) north of Sydney, when the shark swam towards him and then under his surfboard on Wednesday, with the drama being captured on a drone used by lifeguards to watch for sharks.

The 1.3-metre (five-feet) Great White Shark then circled and swam up to Wilkinson’s feet, which were trailing in the water, and quickly turned away.

#SHARK // @wsl surfer Matt Wilkinson has had a close encounter with a shark while surfing at #Ballina today.
The arrival of a #drone overhead alerted Matt via a warning over the speaker, at the same time a 1.5m shark appeared.

“I was surfing out the back at Sharpes Beach and just cruising on my own,” Wilkinson, a former pro surfer, said in a press release issued by Surf Life Saving NSW.

“I heard a splash and a noise and looked around and couldn’t see anything. Then the drone came down and told me that there was a dangerous shark in the area,” he said.

“I realised how close it came without knowing it was there. I called my wife because I didn’t want her to see the footage before I saw it. She doesn’t want me surfing for a couple of days now.”

Wilkinson competed in a world championship heat just before Australian Mick Fanning’s encounter with a large white shark at Jeffreys Bay in South Africa in 2015, which he fought off by punching it.

The area around where Wilkinson was surfing has a reputation for sharks and has been the scene of a spate of attacks over the years.

A 46-year-old surfer was killed last month at a Gold Coast beach after he suffered severe leg injuries from a shark attack, with Australia recording a total of 19 shark attacks in 2020, according to the Taronga Conservation Society.