Dressed Like Mahatma Gandhi, Some In Delhi Protest Against Hathras Case 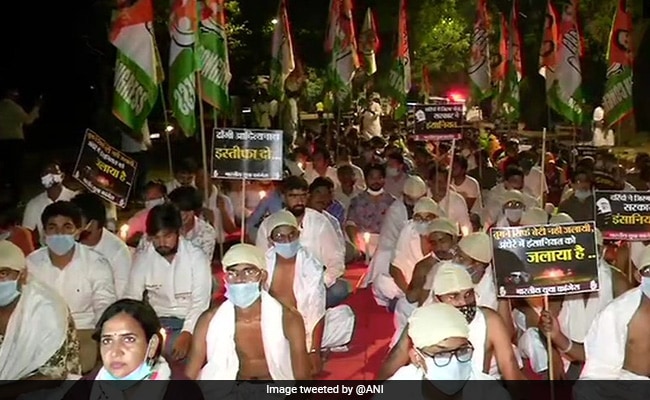 A group of Youth Congress workers marked Mahatma Gandhi’s 151st birthday on Friday with a unique protest, dressing up as the icon himself and demonstrating at Jantar Mantar in Delhi against the alleged gang rape and murder in Uttar Pradesh’s Hathras.

They were seen carrying placards and posters that said, “You haven’t merely burnt a girl under the cover of darkness, but humanity itself,” according to news agency ANI, referring to the hasty 2:30 am cremation by the UP police.

Activists of the Youth Congress also took out a candlelight vigil to pay homage to the woman and demanded justice for her.

The march led by Youth Congress president Srinivas BV began from the organisation’s headquarters on Raisina Road and ended at Jantar Mantar.

The protest at Jantar Mantar had around 500 people taking part, including Delhi Chief Minister Arvind Kejriwal, CPI(M) leader Sitaram Yechury, and Bhim Army chief Chandrashekhar Azad. They were demanding justice for the 20-year-old Dalit woman who died on Tuesday following an assault by four men from a so-called “upper-caste” community.

The woman had reportedly suffered fractures, paralysis, and a spinal injury during the assault.

Chief Minister Yogi Adityanath’s BJP government in Uttar Pradesh has faced searing criticism over the state’s handling of the case.

The police there have also cordoned off the woman’s family in Hathras from the media and political leaders, a move that drew criticism even from senior BJP member Uma Bharti.

“I request you to allow media persons and other political parties to meet the aggrieved family,” Ms Bharati said in one of her tweets addressed to Mr Adityanath on the issue.

With inputs from ANI