Dilip Kumar And Saira Banu, Twinning In Pink, In An Evergreen Pic 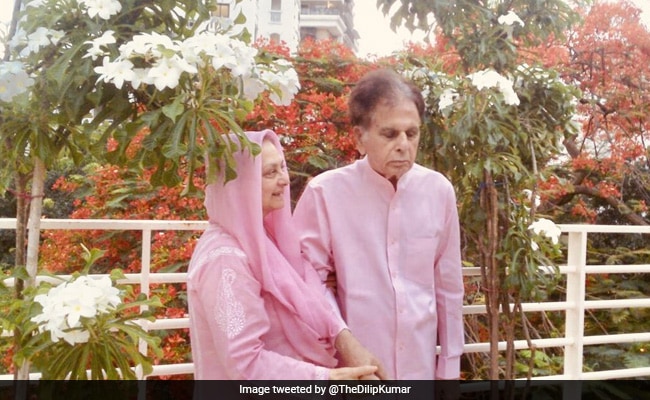 Bollywood veteran Dilip Kumar, who has been in isolation since March, shared a million-dollar photograph of himself along with his wife and actress Saira Banu, on Twitter and it has our heart. The star couple can be seen smiling with all their hearts as they pose together, standing hand-in-hand. The foliage in the backdrop adds to the picture perfect frame. Dilip Kumar dressed in his “favourite shirt” (as revealed by him in his caption), can be seen twinning with Saira Banu, who can be seen wearing a matching kurta and a dupatta over her head. The 97-year-old actor captioned the post: “Pink. Favorite shirt. God’s mercy upon all of us.”

Take a look at Dilip Kumar’s post here, you can thank us later:

Pink. Favorite shirt. God’s mercy upon all of us. pic.twitter.com/04HyuDFfAB

Dilip Kumar and Saira Banu, co-stars of films such as Sagina Mahato, Gopi, Bairaag and Duniya, got married in October 1966. In March this year, Saira Banu shared an update on the legendary actor’s health in the form of an audio visual message, in which she said, “Sab kuch theek hai, allah ka shukr hai, aap sab ki dua hai (We have your love. We have your affection and we are so grateful to you and so grateful to God. God is kind, thank you).”

Before the imposition of the nationwide-lockdown in March this year, Dilip Kumar revealed that he and his wife, actress Saira Banu, were under “complete isolation and quarantine” as a precautionary measure against coronavirus. In a separate post, he requested his fans to “stay indoors as much as possible.”

I am under complete isolation and quarantine due to the #CoronavirusOutbreak. Saira has left nothing to chance, ensuring I do not catch any infection.

Dilip Kumar is best-known for his performances in classics such as Kohinoor, Mughal-e-Azam, Shakti, Naya Daur and Ram Aur Shyam, to name a few. He was last seen in the 1998 film Qila.