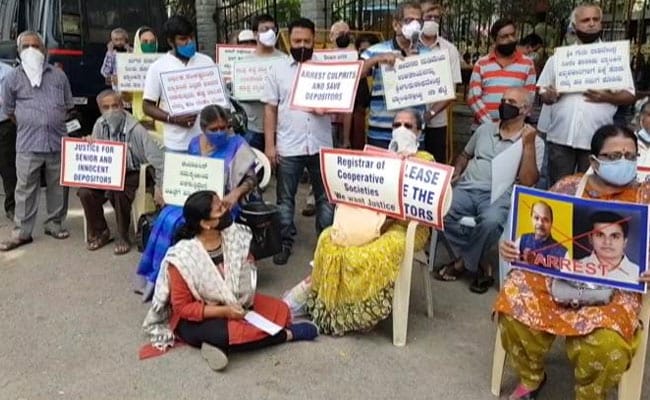 The Bengaluru protest was held at the Maurya circle, a place frequently used for protests.

Depositors of the crisis-hit Sri Guru Raghavendra Bank and Punjab and Maharashtra Co-operative Bank (PMC) were out protesting on the streets of Bengaluru on Wednesday.

The Guru Raghavendra Bank began being investigated by the Reserve Bank of India in January this year. For the PMC Bank, alleged irregularities have been investigated for over a year now. There is a limit fixed in how much depositors can withdraw of their own money, and this has made life difficult for many people, including several senior citizens.

The depositors have been organising protests to try and draw attention to their situation and get a quick closure to the investigation.

Shreya, a depositor of Guru Raghavendra Bank, told NDTV, “The problem has been there for the last 10 months. Nobody is giving us the facts. We are in a total mess. My mother is a senior citizen and she has all her deposits in this bank. With just one lakh rupees, how can anyone survive in this big city? Rent itself is Rs. 10,000. And medicines. And food (sic).”

Suresh too is a depositor in the Bengaluru-based bank, as are his wife and sister. “We thought it was a very good bank and deposited all our money there, based on the bank’s standing as projected by RBI. We can’t understand why they still have not been able to arrest the culprits. It is really ridiculous. The audit is still not complete. We have deposited all our hard earned money in the bank and we don’t have any money with us. It is a very pitiable situation.”

VV Raghavan, a depositor of PMC Bank, said, “The properties of the fraudsters have been seized. If those properties can be monetised later, why can’t the Centre infuse funds and wipe the tears here? All it requires is political will. We hope with this strike we can get some justice.”

The Bengaluru protest was held at the Maurya circle, a place frequently used for protests.

Guru Raghavendra Bank had hit the headlines in January when the RBI began an investigation into financial irregularities amounting to over Rs. 1,400 crore.

The central bank had imposed a set of restrictions early January for “next six months or until further review” at the time. The bank was not allowed to carry out any further transactions and the amount of withdrawal allowed to each depositor was limited to Rs. 35,000, a decision that saw depositors, many of them elderly, stand in long queues to withdraw the permitted amount. The limit of withdrawal was raised to Rs. 1 lakh in June, which once again saw queues, despite the coronavirus pandemic having started by then.