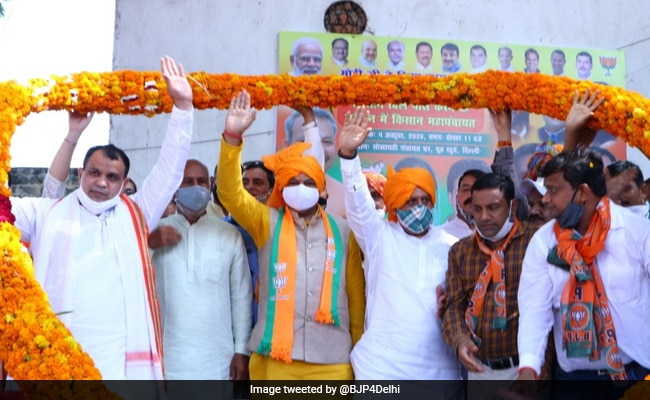 The Delhi BJP will hold tractor pujas and rallies as part of its campaign to counter the opposition’s attack on farm laws passed recently by parliament and reach out to farmers in rural pockets of the city, party leaders said on Sunday.

The preparations for the campaign covering 365 villages up to October 15, were discussed in the first meeting of the newly appointed state office bearers on Saturday, they said.

“Tractor pujas and tractor rallies will be an important part of the campaign to expose how Congress and other parties are misguiding the farmers over the recently passed farm Bills of Modi government,” said Delhi BJP general secretary and campaign convener Kuljeet Chahal.

A tractor was torched near India Gate on Monday by the Indian Youth Congress as a “symbolic” act against the “anti farmer” farm laws.

The BJP had accused the Congress of trying to vitiate the atmosphere and defame farmers by torching the tractor.

“By holding tractor pujas and rallies we will show that tractors are a source of farmers prosperity and Congressmen have no regard for their well-being,” Chahal said.

Amid protests by farmers in Punjab and Haryana, President Ram Nath Kovind had on September 27 given assent to three contentious farm bills — The Farmers” Produce Trade and Commerce (Promotion and Facilitation) Bill, 2020, The Farmers (Empowerment and Protection) Agreement of Price Assurance and Farm Services Bill, 2020, and The Essential Commodities (Amendment) Bill 2020.

The Opposition parties have been criticising the manner in which the Bills were passed in parliament and over minimum support price issue.

Delhi BJP leaders including its MPs and MLAs have started reaching out to farmers in the city through door to door contact and in small meetings in rural areas.