The contribution of stubble burning to Delhi’s air pollution today rose to 36 per cent – the maximum this season so far – as skies in the national capital turned yellow and hazy.

According to data shared by System of Air Quality and Weather Forecasting And Research, SAFAR, farms fires’ contribution to Delhi’s air pollution has doubled within a day.

It rose from 18 per cent on Wednesday to 36 per cent today as NASA’s satellite imagery showed a large, dense cluster of fires that covered most parts of Punjab and some regions of Haryana, indicating little relief from toxic air in the days to come. 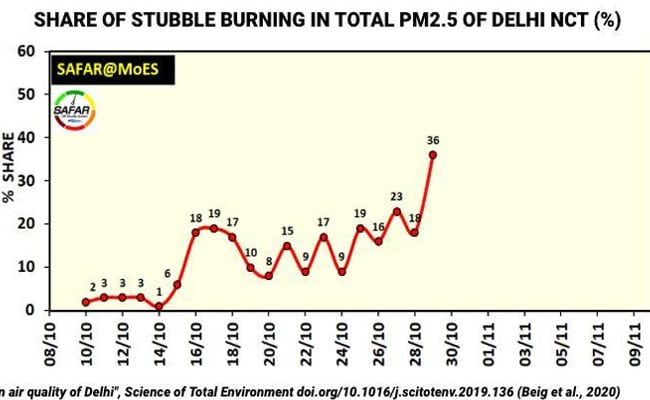 Share of stubble burning in Delhi’s air pollution rose from 18 per cent on Wednesday to 36 per cent today.

This coupled with local factors have pushed Delhi’s air near the “severe” category (375) as pollution index readings across majority of city’s monitoring stations crossed the 400-mark.

For weeks, there has been intense political debate over the contribution of farm fires to Delhi’s annual air pollution problem.

While the BJP initially dismissed the role of farm fires, blaming local factors for making the city and its adjoining areas a gas chamber, Delhi Chief Minister Arvind Kejriwal had pointed out that “being in denial won’t help”.

The Delhi government has accused the Centre of year-round “inaction” and only showing concern in the run up to the harvest season. “This affects the whole of north India,” Delhi Deputy Chief Minister Manish Sisodia had said.

He had also nudged the Supreme Court-appointed Environment Pollution Control Authority to direct the Centre and governments of neighbouring states to act.

This panel was suspended by the top court today after the central government brought in an ordinance, or executive order, for the formation of a permanent committee to deal with the annual problem.

The winter air pollution – considered a mix of local factors and stubble burning in Punjab, Haryana, Uttar Pradesh and Rajasthan – has been a matter of great concern this year, with experts saying it could not only lead to a spike in coronavirus cases, but add to the severity of symptoms.

Delhi is recording a surge in daily Covid cases, which crossed the 5,000-mark for the first time since the outbreak in January fuelling speculation if the city-state was seeing a third wave of infections.