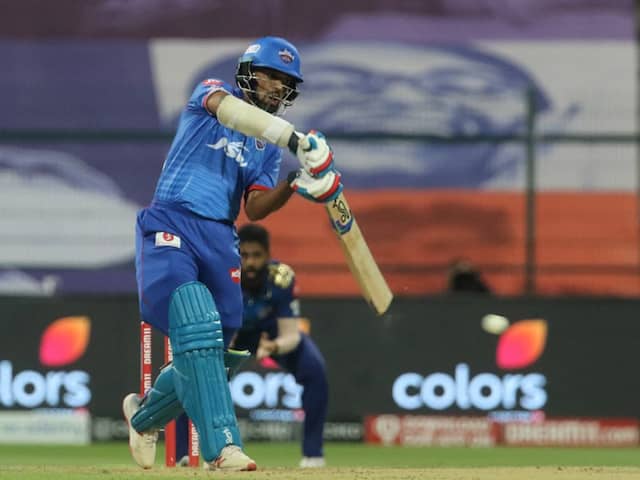 IPL 2020: Shikhar Dhawan returned to form with an unbeaten knock of 69 against Mumbai Indians.© BCCI/IPL


Delhi Capitals will take on Rajasthan Royals in match 30 of the Indian Premier League 2020 at the Dubai International Stadium on Wednesday. Delhi Capitals will look to bounce back after suffering a defeat against Mumbai Indians in their last fixture. The Delhi-based franchise have won five matches out of seven so far in the ongoing tournament but an injury to their wicketkeeper-batsman Rishabh Pant has disturbed the balance of the side. On the other hand, Rajasthan Royals brought in Ben Stokes into the side and despite the England all-rounder missing out, they managed to secure a thrilling win over SunRisers Hyderabad in their last outing.

Shreyas Iyer (9.5): The Delhi Capitals skipper has scored 245 runs in this season at an impressive average of 40.83. Iyer has been in good form and has scored in almost every game. Also, he rarely drops a catch which can fetch you some additional points if the ball goes in the air towards him.

Shikhar Dhawan (9.0): The opening batsman returned to form with an unbeaten knock of 69 against Mumbai Indians. Dhawan is known for his explosive batting and with no off-spinner in Rajasthan Royals’ bowling attack to trouble him in the middle overs, he will look to take the attack to the bowlers.

Sanju Samson (9.5): After starting the tournament with two explosive half-centuries, Sanju Samson’s form has taken a dip in the tournament. However, in Rajasthan Royals’ last game, Samson played with a cautious approach and scored 26 runs. During his stay at the crease, Samson looked in complete control and if Rajasthan get off to a good start, Samson can be in a for a big knock.

Jofra Archer (9.0): Jofra Archer has been one of the best bowlers in the ongoing IPL 2020. The England pacer has troubled the batsmen with his pace and bounce. He has nine wickets from seven games at an impressive economy rate of 6.82. Archer will look to make an impact against a star-studded Delhi Capitals batting line-up.

Marcus Stoinis (9.0): Marcus Stoinis has proved that he is capable to change the game with both bat and ball. Stoinis has picked up six wickets and also scored 175 runs so far at a strike rate of 175.0. The Australian all-rounder has two half-centuries to his name and will be looking to put in another handy contribution as Delhi Capitals take on Rajasthan Royals in a bid to once again go top of the table.

Note: Price of the players are mentioned beside their names.

India Gets Chairmanship Of Governing Body Of International Labour Organisation