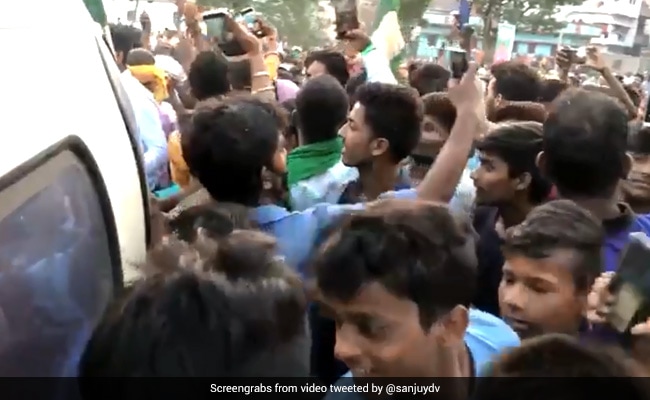 Tejashwi Yadav’s rallies in particular have seen big crowds, with caution thrown to the winds

A crowd surrounding the helicopter of Tejashwi Yadav during his campaign for the ongoing Bihar election had his party RJD raising security and Covid concerns.

In visuals shared on social media, a heaving crowd was seen pressing against Tejashwi Yadav’s chopper, with no sign of distancing and other safety measures prescribed for the coronavirus.

Sanjay Yadav, political advisor to the RJD (Rashtriya Janata Dal) leader, called it a security breach and a “deliberate attempt” to jeopardise his campaign. The state government had done nothing, he said, even though the former deputy Chief Minister was a Y plus category protectee.

“Such security breach for a Leader of Opposition who is a Y plus protectee. Tejashwi Yadav and the Pilot have to request the crowd to disperse. Despite repeated requests to (Election Commission), the situation remains the same. It appears to be a deliberate attempt to jeopardize the campaign and is a threat to his life,” Sanjay Yadav tweeted along with a letter that the party had written to the Election Commission earlier.

Senior RJD leader Manoj Kumar Jha had complained to the powerful poll body that because of “inadequate security arrangements” at the leader’s meetings, “anti-social elements cause immense trouble and ugly scenes”.

The Election Commission had warned about Covid and had announced rules for campaigning and voting as the country fights infections. However, the Bihar campaign has seen huge rallies and meetings where the crowds present a frightening spectre of virus super-spreaders.

Tejashwi Yadav’s rallies in particular have seen big crowds, with caution thrown to the winds. Very few people were seen in masks and social distancing was non-existent.