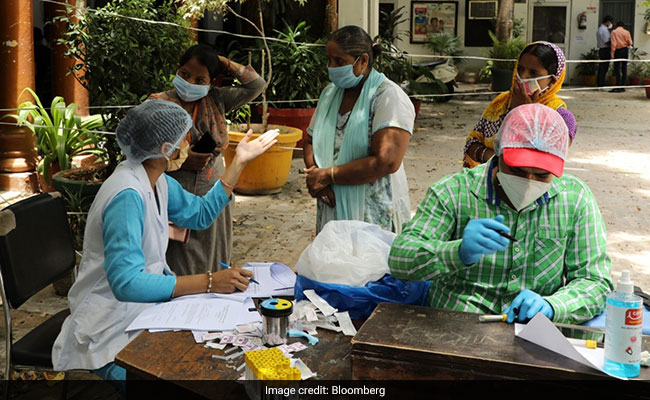 Coronavirus super-spreaders were behind the explosion of Covid-19 in India, the country with the most cases after the U.S., researchers said.

A group of patients that included about 8% of India’s confirmed cases later led to almost two-thirds of its total infections, scientists said Wednesday in a study published in the journal Science. The research, based on tracing more than 3 million contacts in Andhra Pradesh and Tamil Nadu through Aug. 1, is the first major study of transmission in a developing country.

While most research on the pandemic has come from China, Europe and North America, cases are now burgeoning in India and other developing countries, according to researchers led by Ramanan Laxminarayan, director of the Center for Disease Dynamics, Economics & Policy who wrote the study. Barriers to health care are greater in these nations, and the risk of getting severely ill and dying from Covid is higher, they said.

“We’ve never had this degree of information to say, hey, some people are really transmitting the virus in a massive way,” Mr Laxminarayan said in an interview. In contrast with the super-spreader minority, 71% of confirmed cases whose contacts were traced weren’t found to have spread the virus to anyone.

A nationwide serological survey showed that one in 15 Indians have been exposed to the coronavirus. Hospitals in several states are now struggling to secure medical oxygen, needed to assist patients with trouble breathing on their own.

Data for the Science study were gathered by thousands of contact-tracers during India’s lockdown, when mass gatherings were banned, schools were closed and people were ordered to wear face masks in public. Almost 130 million people live in the two Indian states, accounting for about 10% of the country’s population. India has recorded more than 6.2 million Covid-19 cases.

Both states reported their first SARS-CoV-2 infections on March 5. Health workers traced as many as 80 contacts per confirmed case, using skills and resources honed from routinely tracking potential transmitters of HIV and tuberculosis, Mr Laxminarayan said.

Prolific SARS-CoV-2 transmitters tended to spread the virus during prolonged close contact on buses and other forms of transportation, according to the researchers, who were also from Princeton University, Johns Hopkins Bloomberg School of Public Health, and Indian state governments. In such settings, there was a 79% chance of an infection occurring.

That compares with only a 1 in 40 chance of catching the virus from someone in the community who wasn’t a household member, Mr Laxminarayan said. Children under 14, though, were found to be frequent “silent” spreaders of the virus, especially to their parents and peers.

“This shows that even without schools being functional, children-to-children transmission seems to be quite important,” he said. “As terrible as it is to say — with two kids at home myself — it’s actually important to keep the kids home.”