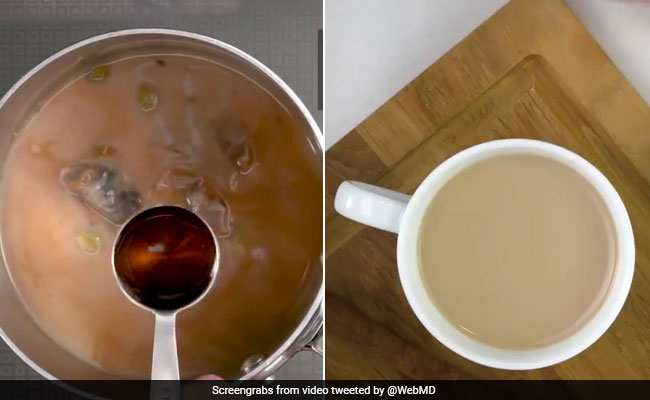 This recipe for chai latte has divided opinions on social media.

A recipe for “chai latte” – shared by medical website WebMD on Twitter – has polarised opinions on the microblogging platform. Tea lovers are usually quite particular about the way their tea is prepared. It is said that brewing the perfect cup of chai is an art in itself. While some prefer theirs without any spices, others love a good hit of cardamom and ginger in their tea. But this recipe by WebMD has not found many takers on the microblogging platform – with dozens of people denouncing it as an “abomination”.

“Learn how to make a chai latte — without the coffee shop price tag,” wrote WebMD while sharing the recipe video.

It starts off like any good cup of tea does – with water being put to boil. Three tea bags are added to two cups of water. After that five crushed cardamom pods and cloves go in. So far, so good. Then, the recipe begins to deviate from the traditional cup of masala chai with the addition of star anise. Cinnamon sticks and a tablespoon of ginger complete the spice mix, but then comes the part that truly has desi Twitter aghast – the addition of coconut milk and maple syrup. See for yourself:

Learn how to make a chai latte — without the coffee shop price tag. pic.twitter.com/pVZTEBXyL3

The video has garnered over 88,000 views since being shared on Sunday, but many on the microblogging platform had nothing but criticism for it.

Some felt that it had too much going on

Damn, white people, the only thing left to add to this abomination is some garam masala.

Tea leaves, sugar, milk and water with some ginger oe cardamom… That’s it… That’s the best tea u can get… Stop adding all that garam masala..

Others could not get over the coconut milk and maple syrup

Chai with Coconut milk??? What blasphemy is this???

Oh god no… nope nope nope. Coconut milk? Maple syrup? Who did you talk to? Canada?!

Add rice instead of tea bags and this will be biryani???? pic.twitter.com/ZmvmFM5i5E

Masala Chai – much better with plain milk than coconut milk. Also boil all the ingredients without the tea bags. Add them after you take the concoction off the stove for a couple of minutes.

Exactly!! Tea should never be boiled. It is always brewed. Just soak in hot water and that’s it!

Still, the recipe did find a few fans

I’m not with the coconut milk but to all the Indians ranting here chai tastes awesome with Maple syrup and all those spices.

Where do you stand on this? Let us know using the comments section.

Kajol’s Favourite Word? It’s The Biggest Word You Ever Heard…

Parantha With Knife-Fork? The Punjabi Phrase That Sums Up Gurinder Chadha’s Shock