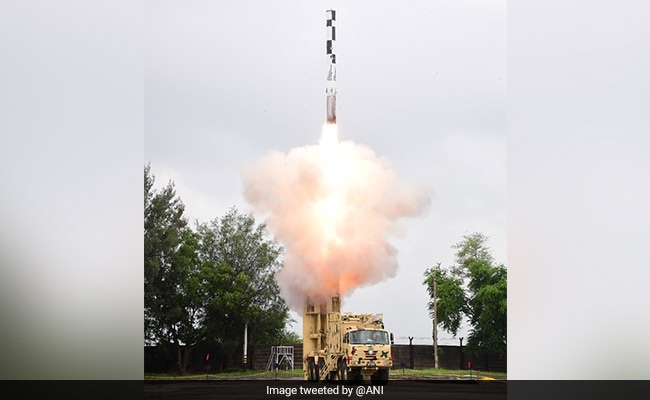 A version of the BrahMos supersonic cruise missile fitted with a homemade booster, airframe and other components blasted off and flew straight to its target successfully off the coast of Odisha today.

“It is one more major step in enhancing the indigenous content (of the missile),” the government said in a statement soon after the successful test-firing.

After being launched from the Integrated Test Range in Odisha’s Balasore, the surface-to-surface missile which can also be used to destroy key warships such as aircraft carriers, flew at a speed of Mach 2.8 or nearly three times the speed of sound, the government said. Today’s version of the BrahMos was the Land-Attack Cruise Missile or LACM.

“Today’s successful launch has paved the way for the serial production of the indigenous booster and other indigenous components of the powerful BrahMos weapon system and realising the Atma Nirbhar Bharat (self-reliant India) pledge,” the government said in the statement.

Defence Minister Rajnath Singh in a tweet congratulated the Defence Research Development Organisation (DRDO) and the team behind the BrahMos missile for the “spectacular mission”.

“Congratulations to Team @DRDO_India and @BrahMosMissile for the successful flight testing of #BRAHMOS Supersonic Cruise Missile with Indigenous Booster and Air Frame for designated range. This achievement will give a big boost to India’s #AtmaNirbharBharat Pledge,” Mr Singh tweeted.

Congratulations to Team @DRDO_India and @BrahMosMissile for the successful flight testing of #BRAHMOS Supersonic Cruise Missile with Indigenous Booster and Air Frame for designated range.

This achievement will give a big boost to India’s #AtmaNirbharBharat Pledge. pic.twitter.com/39YuAcemed

BrahMos is a two-stage missile with a solid propellant booster engine as its first stage which brings it to supersonic speed and then gets separated, says BrahMos Aerospace Ltd, a joint venture between India and Russia that developed the missile.

The liquid ramjet or the second stage then takes the missile closer to Mach 3 or three times the speed of sound in cruise phase. The missile has a flight range of up to 290-km with supersonic speed all through the flight, leading to shorter flight time, consequently ensuring lower dispersion of targets, quicker engagement time and non-interception by any known weapon system in the world.