Bought In 1999, This Harry Potter Book Could Fetch Lakhs At Auction 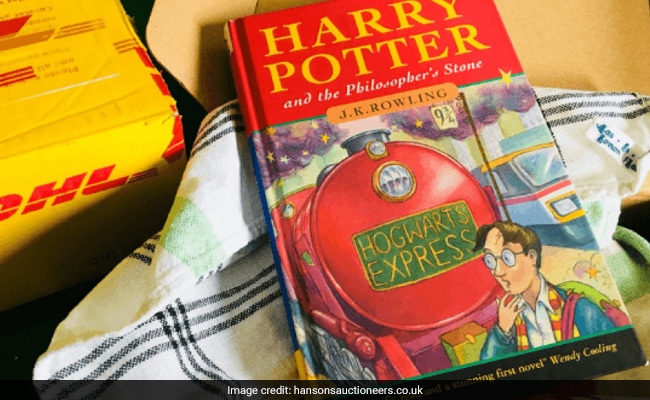 This copy of Harry Potter and the Philosopher’s Stone is set to go under the hammer.

A man was stunned to discover that a Harry Potter book he purchased in 1999 could fetch a small fortune at an auction later this month. The retired British expat, who lives in Luxembourg, said that the rare first edition copy of Harry Potter and the Philosopher’s Stone had been sitting on his bookshelf for more than 20 years.

The hardcover copy is one of only 500 that were printed. It is going under the hammer at Hansons’ Staffordshire Library Auction on October 13 and is estimated to be worth 20,000 to 30,000 pounds. However, thanks to its “astonishingly good condition”, the first edition could fetch as much as 50,000 pounds – or approximately Rs 48 lakh.

“True first issues are seriously scarce,” said Hansons’ book expert Jim Spencer in a news release by the auction house. “Only 500 were printed, 300 of which were sent to schools and libraries.

“This is extra rare because it’s one of the remaining 200… This new copy deserves to do really well because it’s in astonishingly good condition.”

The first book of the hugely popular fantasy series by JK Rowling, Harry Potter and the Philosopher’s Stone paved the way to Harry Potter mania across the world. The man who discovered its first edition copy sitting in his bookshelf said that he had bought it to help his children learn English.

“A couple of months ago when JKR bounced into the main news I decided to re-read the Potter series. I knew there had been a few first editions sold recently and Hansons was featured on the BBC website so, just to be safe, I checked the criteria,” he said.

“I did not think mine would be valuable as it was certainly not purchased when first published.I was very surprised and shocked to see that it did in fact tick all the boxes, but still could not quite believe it until I checked with Jim Spencer.”

He now plans to sell the book to help his daughter pay off a loan.

According to Hansons Auctioneers, there are several ways to identify a genuine Harry Potter first issue that was published by Bloomsbury in 1997. One is the “duplication of ‘1 wand’ on page 53. However, most importantly, the issue number must read: ’10 9 8 7 6 5 4 3 2 1′.”