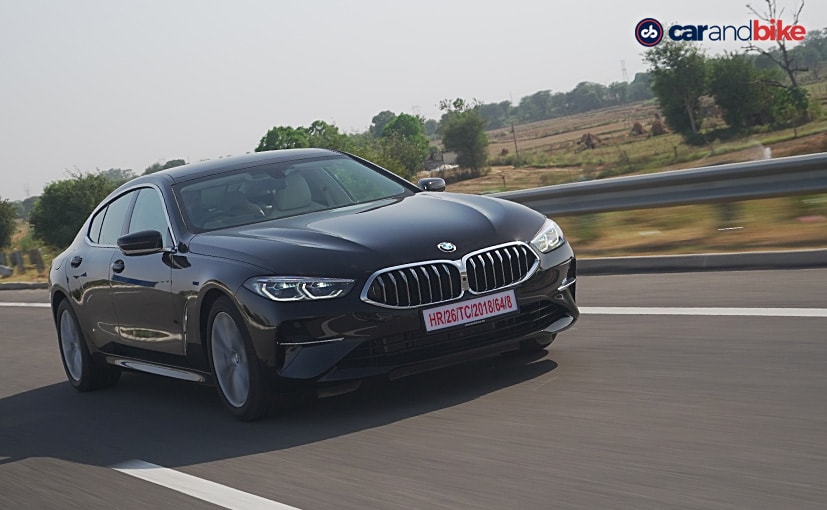 The 8 series is essentially a replacement of 6 series in the market.

BMW launched the new 8 series in the market as soon as the lockdown across the country started opening up. And along with it also came the more powerful M8, making them the new flagships for the brand in the country. The 8 series is essentially a replacement for the 6 series in the market and carandbike already reviewed the car last year in Portugal in the exact same 840i specification that has made its way to India. Apart from the base version we have here the car also gets an M-sport variant. 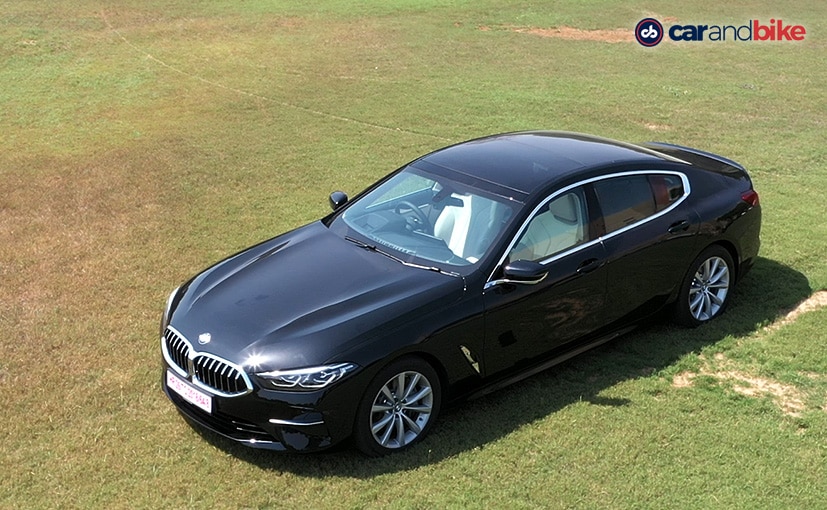 Only the Grand Coupé version of the 8 series has made its way to India.

Internationally the 8 series comes in 3 body styles – Coupé, Convertible and the Grand Coupé. India, for the time being, gets only the Grand Coupé version. The first thing you notice is the nice looking kidney grille and if you’re not a fan of those big sized grilles seen on the 7 series sedan or X7 SUV you will like this one. You get more chrome here when compared to the M-sport and yes the slats on the kidney grille are adjustable. 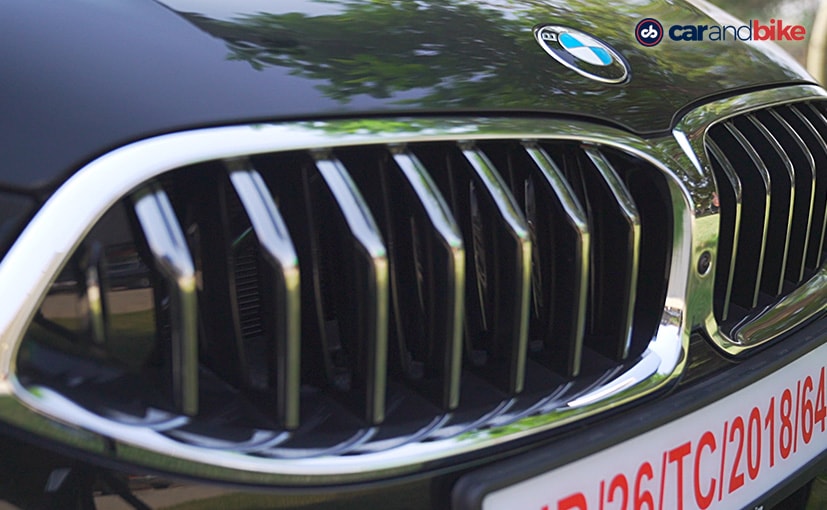 The sleek looking adaptive headlamps also look nice, but the laser headlights seen on the M-sport are missing on the base version. The latter also gets 18 inch alloys unlike the M-sport that gets 19 inch wheels. This car is both taller and wider than the coupe and that will just translate to more space inside, but more on that later. The rear sees wraparound LED tail lamps, skid plates with dual exhausts and a curved spoiler that integrates beautifully into the body and it all is so sexy. In all there are 6 colour options to choose from in the base variant, while the M-sport gets 10 colour options. 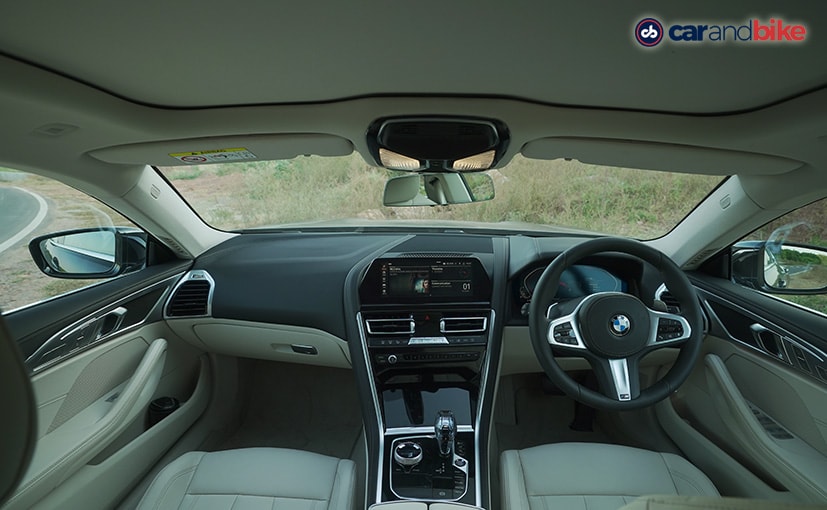 The centre console is really wide and houses the iDrive touchscreen system.

The cabin of the 8 series is classic example of how you create individuality while being  a part of the family. There are bits that will remind you of some other cars from BMW but a lot of it is also very exclusive to this car. The centre console on the dash is really wide; it houses the touchscreen system and the AC vents and gives you the feel that you’re sitting in a big premium luxury car. The quality of course is top notch, you expect that from the flagship of the brand. The shiny crystalline elements on AC vents, volume control knob and the idrive controller look nice. The gear selector has an illuminated 8 on it, which looks special. 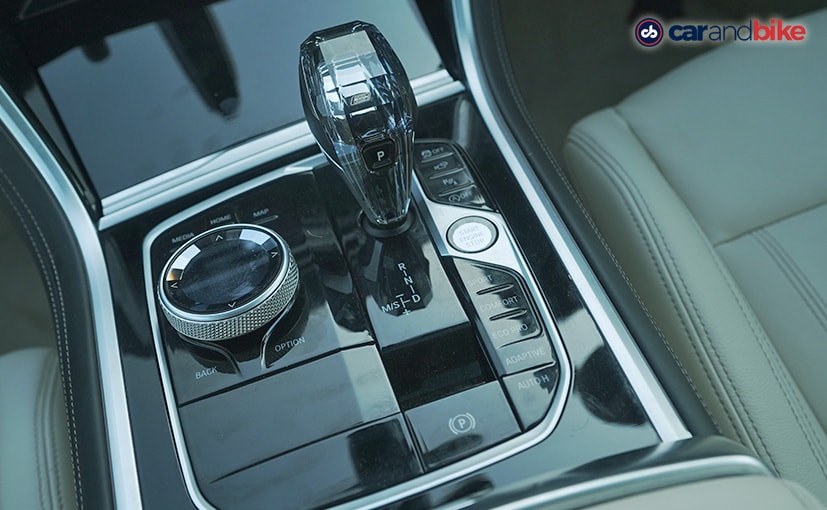 The gear selector has an illuminated 8 on it, which looks special.

The big 12.3 inch instrument cluster is likeable too. It is all-digital but looks deceptively like an analogue setup and that’s good for those who hate adjusting to new technologies. Then there’s the 2 part large panoramic glass-roof, wireless charger and ambient lighting in 6 different colours. Centred around black and white, there are 3 interior trims to choose from in base and 3 in M Sport, which gets the Merito trim as standard. On this car you can converse with infotainment system in 5 different ways – iDrive controller, voice commands, touch screen, steering mounted controls and yes gesture control. 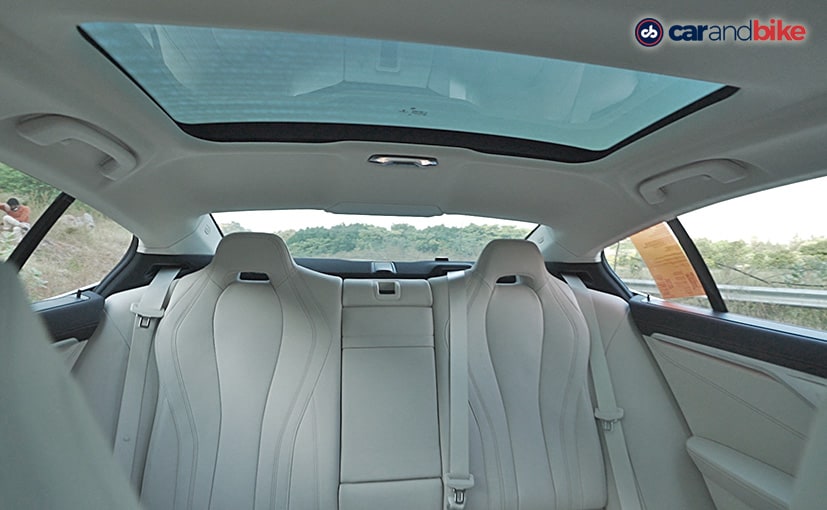 A very important question is how difficult or easy is it to get inside the second row of this car. Considering its a coupé it is quite impressive and there’s a good sense of space once you’re seated. That’s because this is a long wheelbase on the car. What impresses you more is the good amount of knee-room as well as thigh support as the seats are big. Owing to the centre console extending all the way to the rear, the seats become individual and both occupants get their own spaces. If you go in for the M-sport variant you also get climate controls for both the rear seat passengers and a 16 speaker Harman sound system is there too. It is probably unfair to compare it to say a 7 series, but I would’ve liked to see a button on the second row that pushes the front seat to make available more leg room.

How is it to drive? 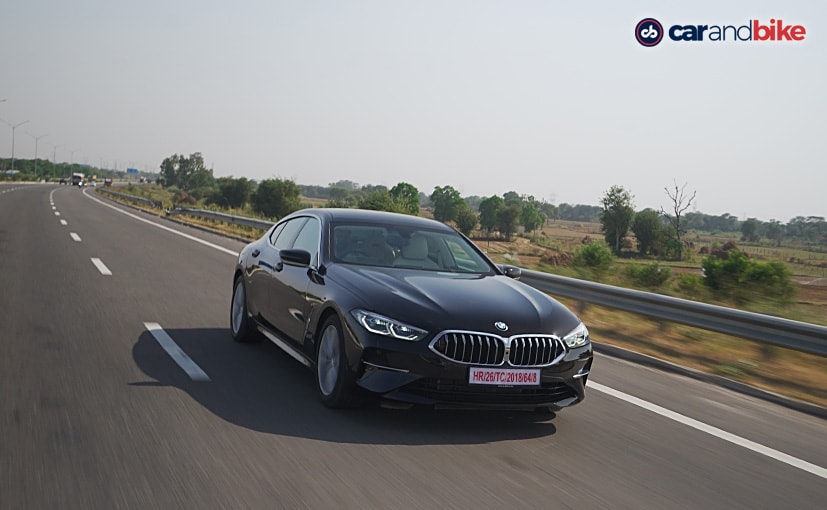 Just like the variations when it comes to body style the 8 series family also gets a lot of options when it comes to engines. But India right now gets only one of them which is the very popular 3.0-litre 6-cylinder twin turbo petrol engine. Numbers are quite impressive here, a maximum power of 340 bhp @ 5,000-6,500 rpm and a peak torque of 500 nm @ 1,600-4,500 rpm. This means there’s enough of power and grunt to make sure that can you have a lot of fun in this car. What also helps is that at 1,500 rpm a majority of the torque is available which is why you don’t feel the lag. Along with an 8-speed step-tronic transmission with paddle shifts, there’s launch control as well. 0 to 100 kmph takes just 5.2 seconds and it drives well too. 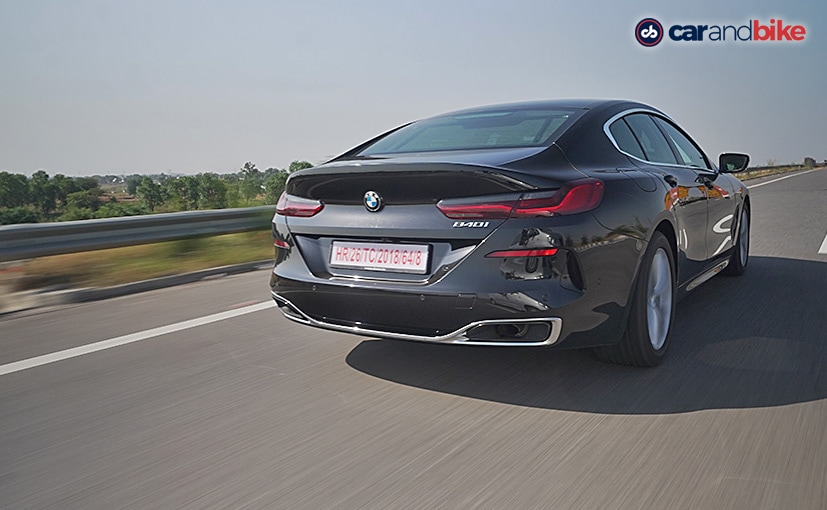 Drive dynamics are pretty similar to those of the 2 door convertible which is remarkable.

You want a stiff suspension it’s here, you want an aerodynamic body, it’s there and the low centre of gravity just makes things even more interesting because it changes the nature of the car. Now we found the drive dynamics of the Gran Coupe pretty similar to those of the 2 door convertible which is remarkable. For the broken or bumpy roads the standard adaptive air suspension helps but you have to be careful at times. Plus you all get all the usual drive modes – Eco Pro, Comfort, Sport and Sport+. The first one allows drivers to make use of the coasting function where at speeds between 50 and 160 km/h the powertrain is disengaged as soon as the driver takes his or her foot off the accelerator pedal. 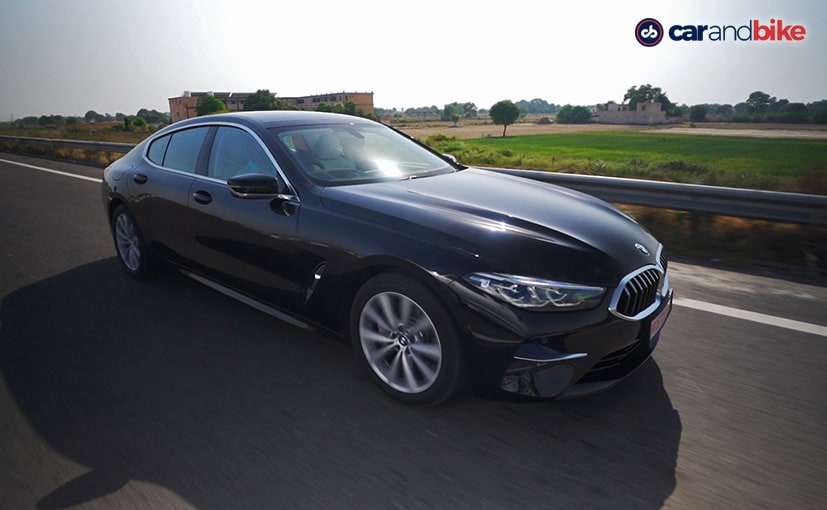 Integral Active steering helps in reducing the turning radius of the car.

This car comes with something called an integral active steering. At speeds below 72 kmph the rear wheels turn in the opposite direction (by around 3 degrees) of the front wheels which means when you’re driving the car in the city, possibly on narrower roads, you need a lesser turning radius and this car will do that for you. But once you go above 72 kmph which means the open roads, the highways, the rear wheels also turn in the same direction as the front wheels to give you a more dynamic feel. 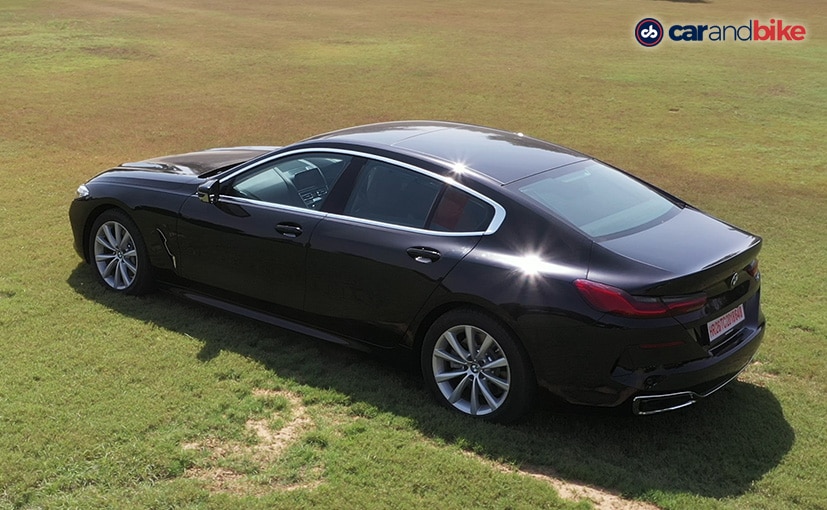 The 8 series the Gran coupe is available in base and Msport trims.

While the 8 series the Gran Coupé starts ₹ 1.3 crore (ex-showroom), the insanely fast and powerful M8 Coupe will set you back by ₹ 2.15 crores. And in between sits the 840i Msport that has been priced at ₹ 1.55 crore. In comparison the highly capable Porsche Panamera starts at around ₹ 1.49 crore (ex-showroom) and its new model is due anytime soon. While most cars from BMW now aim to give you a good combination of luxury and sportiness, there aren’t many that can beat the 8 series when it comes to that.