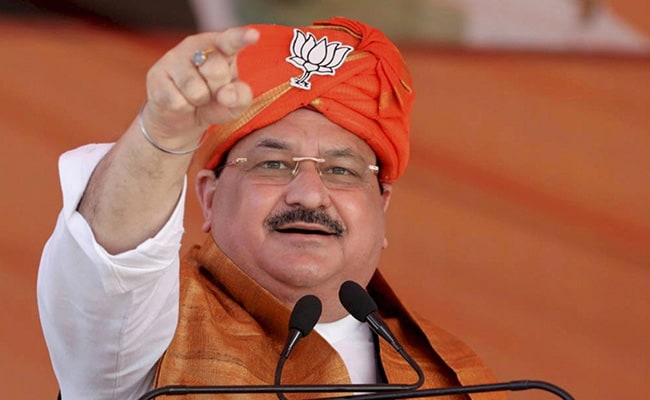 Addressing a poll rally in Begusarai, Mr Nadda also slammed the Lalu Yadav-led RJD, saying the party has a history of conducting “Tail Piyawan, Danda Bhanjan” (dipping lathis in oil and wielding them to assert power) rally, underlining its reputation of preferring muscle power to education.

“These days even Tejashwi Yadav has started saying we will do this, we will do that. But who can trust you in an election?” he asked.

“Those who have done something good in the past will do so in the future. They (RJD) had in the past held ‘Tel Piyawan, Danda Bhanjan’ rally and in future too they will only wield lathis and do nothing else,” Mr Nadda said.

JP Nadda’s reference to ‘Tel Piyawan, Danda Bhanjan’ (dipping lathis in oil and wielding them to assert power) was a throwback to an RJD rally in 2003, two years before the party was ousted from power in Bihar.

“They have done such things. Now the time has come when the finger only can serve the purpose (to press the lotus button). We don’t need lathis,” the BJP president said.

He also responded to Tejashwi Yadav’s persistent attack on Chief Minister Nitish Kumar over his remark that Bihar could not be industrialised as it was “landlocked”.

JP Nadda also said that the Rs 1.25 lakh crore package that Prime Minister Narendra Modi had announced for Bihar in 2015 has been delivered. He also gave a rough break-up of the amount.

Praising the government over its handling of the coronavirus crisis, he said advanced countries including the US have been shaken by the pandemic, but PM Modi saved Indians from the deadly virus.

“Today Donald Trump is contesting the US Presidential elections and his rival Joe Biden is cornering him that he (Trump) could not handle coronavirus. European countries whose health infrastructure is better than us, they were finding themselves helpless.”

“That’s the difference a leadership can make,” he said and went on to detail the governments effort in scaling up facilities and infrastructure to fight coronavirus.

“And similarly, our Nitish-ji has cooperated and worked to save people from coronavirus,” he said.

He said under PM Modi and Chief Minister Nitish Kumar a lot of development work has been completed in Bihar and several are underway.

“This is a news story of development. This Bihar is an emerging Bihar,” he said.

He said a world class, state-of-art medical college is coming up in Begusarai.

“Could you ever imagine a medical college in Begusarai? Engineering college? Even operating colleges were shut down,” he said.

Attacking the RJD over its record on law and order, he appealed to people to vote for NDA candidates.

“Do you want to light a lantern or an LED bulb? A ‘loot raj‘ or a ‘kanoon raj‘? Bahubal (strongmanship) or vikasbal (development)?” he asked the crowd.

He also emphasised that the NDA in Bihar only means four parties: the BJP, the JDU), the VIP and the HAM.

“Some people are trying to spread confusion by praising PM Modi and criticising Nitish-ji. I want to state in clear words the BJP, the JD(U), the HAM and the VIP, only they are NDA.,” he stressed, making it clear the LJP was on its own in the state.

Later he also addressed a rally in Siwan and repeated the charges on the RJD and also criticized the Congress over its stand on the Ram temple issue and Article 370.