Bizarre Snake, Found In US, Stumps Experts. It Turns Out To Be… 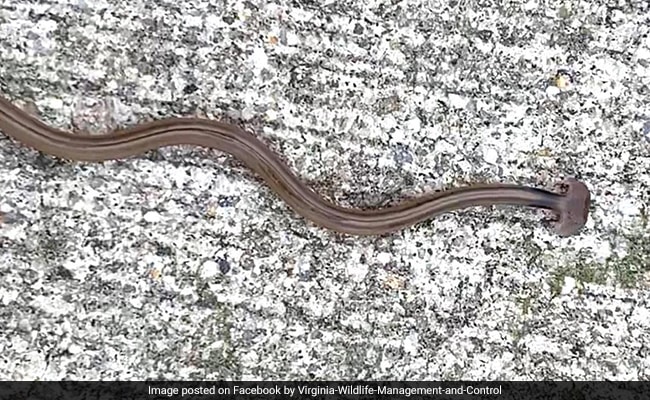 Found in Virginia, this ‘snake’ turned out to be…

The Virginia Wildlife Management and Control’s Snake Identification Hotline was recently contacted about a strange-looking snake. With its half-moon shaped head, the snake stumped experts, who admitted that they had never seen anything like it before.

According to Virginia Wildlife Management and Control, the reptile was found in Midlothian.

They described it as 10 to 12 inches long in a Facebook post asking for the public’s help in identifying the snake. “The problem is, we’ve never seen anything like it before and we’re not sure if it’s a freak of nature, like the 2 headed copperhead, that we were involved with, a few years ago. So if anyone has any idea what it is, please feel free to comment,” the wildlife management company wrote.

The snake was later identified, and it turned out to be something else entirely. The company posted an update revealing that the ‘snake’ was identified as a hammerhead worm, an invasive species native to Southeast Asia.

Hundreds of people commented on the company’s two Facebook posts, noting that these worms are tough to kill.

According to Live Science, hammerhead worms are notoriously difficult to kill. They can regenerate from even small amputated bits of their bodies.

“It is called a shovelhead worm or hammerhead worm, it’s invasive it will kill our earthworms,” wrote one Facebook user, while others suggested putting the worm in salt or vinegar.

According to the Texas Invasive Species Institute, it is believed that hammerhead worms entered the US decades ago. They were apparently brought into the country with horticultural plants and have been regularly found in greenhouses since 1901.