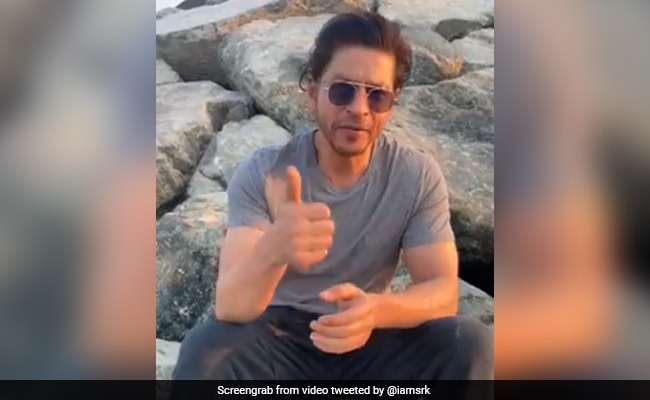 Shah Rukh Khan in a still from the video. (courtesy iamsrk)

Happy Birthday, Shah Rukh Khan! The actor shared a special message for his fans on his 55th birthday, on social media. SRK’s house Mannat which is swamped with fans every year, had earlier requested his fans from collecting outside his house in the wake of the coronavirus pandemic this year. Sharing a video on Monday night, SRK captioned it: “Thank you all… Hope to see you soon again. Stay safe… Love always.” In the video, the actor thanked his fans for all the love. He said in the video, “Hi everybody, this is to thank you for all the wonderful wishes I have been getting on the social media. How much love you guys are spreading.” Thanking his fans clubs, the actor added, “Maybe there are some names, I have forgotten but all of you together, all the loving fans, all the boys and girls… Thank you.”

In his video, the actor also thanked all the fans who contributed towards causes and said, “More than wishing me on my birthday, I know of some of the work you boys and girls have been doing. Giving you time and resources to people who are in need right now… The PPE kits, the blood donations you have been doing, and helping out people everywhere.” He added, “Because you can’t be a lover boy like me without spreading love. So thank you all for spreading the love from far, from near, whatever resources you have.”

SRK signed off the video saying, “Next year we’ll all get together and have a bigger and better party. Like I always say, 56 is better than 55 and we’ll have lots of fun. I miss you all. Lots of love and a big hug to you all. Keep doing the good work.”