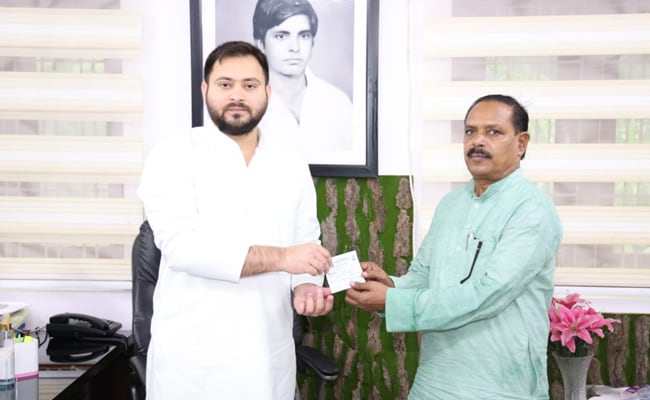 RJD leader Tejashwi Yadav gave membership of the party to the BSP leader.

The BSP of Mayawati which is part of a three-party alliance headed by Upendra Kushwaha of RLSP for Bihar polls, suffered a setback on Saturday when its state unit president Bharat Bind quit and joined RJD.

RJD leader Tejashwi Yadav gave membership of the party to the BSP leader.

Mr Yadav released a picture admitting Mr Bind into the party on his twitter and also the party’s social media platform.

Mr Yadav, the younger son of RJD supremo Lalu Prasad, wrote on his twitter handle that the Bahujan Samaj Party Bihar president joined them to lend support in making a new Bihar and remove anti-youth NDA.

After being spurned by the NDA and discarded by the RJD-helmed mahagathbandhan, Kushwaha has forged an alliance with the BSP and a non-descript Janatantrik Party (Socialist) for the Bihar elections.

BSP supremo Mayawati has also announced that her party would be supporting Kushwaha as the “Chief Ministerial” candidate in Bihar, an assertion which is being ridiculed at by the ruling NDA well as the grand alliance comprising RJD, Congress and others.

Mayawati’s party had faced desertions in Bihar in 2010 too when its three MLAs had switched sides to Lalu Prasad’s party after cross-voting for the then RJD-LJP nominees for Rajya Sabha election- Ramvilas Paswan and Ramkripal Yadav.