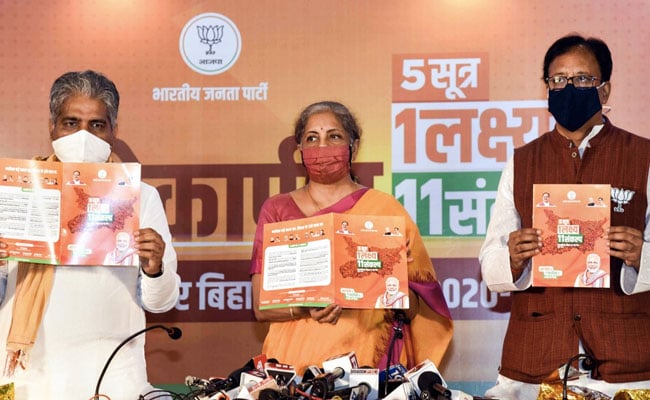 Nirmala Sitharaman had released the BJP manifesto for the Bihar polls on Thursday.

Amid the opposition’s criticism of the BJP’s Bihar poll promise of free COVID vaccines, Finance Minister Nirmala Sitharaman asserted on Saturday that the announcement was perfectly in order and a party can announce what it wants to do when it comes to power.

Ms Sitharaman had released the Bharatiya Janata Party’s (BJP) manifesto for the Bihar polls on Thursday. A highlight of the promises made in the document was free COVID vaccines for the state’s people if the BJP comes back to power.

Opposition parties had slammed the BJP for the promise and demanded action by the Election Commission (EC), while alleging that the ruling party was using the pandemic for political gains.

Speaking to reporters here, Ms Sitharaman, a senior BJP leader, said, “It is a manifesto announcement. A party can announce what it wants to do when it comes to power. That is exactly what is announced. Health is a state subject. It is perfectly in order.”

Every party in its manifesto states what it wants to do when it comes to power, she added.

The Bihar Assembly polls are scheduled to be held in three phases, starting October 28.