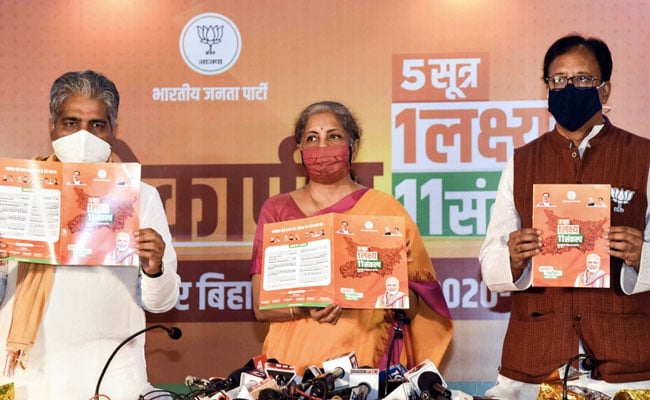 The BJP’s poll promise in Bihar – to provide free coronavirus vaccines – does not violate the model code of conduct in force during Assembly elections in the state, the Election Commission said Saturday, responding to a RTI filed by activist Saket Gokhale.

“…no violation of any of the provisions of Model Code of Conduct has been observed…,” the poll body said in its reply, news agency PTI reported.

Sources told PTI the Election Commission cited “Directive Principles of State Policy (as) enshrined in the Constitution…” to say “there can be no objection to the promise of welfare in an election manifesto”.

The trust of voters should be sought only on those promises that can actually be fulfilled, the poll body said in its second point, in a reference to reports that a potential vaccine for the COVID-19 virus could be available as early as the second quarter of next year.

Last week the BJP was criticised after Union Minister Nirmala Sitharaman, while launching the party’s manifesto for the Bihar election, promised “free coronavirus vaccination for all“.

The announcement was met with shock and indignation by opposition leaders, leaving the BJP fending off allegations that it was using the promise of a vaccine – for an infectious and fatal illness that has already killed over 1.21 lakh in India alone – for its political agenda.

More than 150 potential vaccines are being developed and tested globally

The BJP, initially quiet, later responded via Bihar leader Bhupender Yadav, who said the vaccine would be available at a nominal cost, which the states could opt to bear. Mr Yadav lashed out at the Congress for a “desperate” attempt to twist Ms Sitharaman’s statement.

Ms Sitharaman has insisted there was nothing wrong with her party’s announcement and it only reflected what it wants to do when it comes to power.

“It is a manifesto announcement. A party can announce what it wants to do when it comes to power. That is what is announced. Health is a state subject. It is perfectly in order,” she was quoted by PTI.

Serum Institute CEO Adar Poonawalla told NDTV that around 100 million doses of a vaccine developed by Oxford University and pharma giant AstraZeneca could be ready in a matter of months.

More than 150 potential vaccines are being developed and tested globally, with 38 in human trials, and candidates from Moderna, Pfizer and AstraZeneca already in late-stage trials.

India has reported over 80 lakh Covid cases since the pandemic began in China in December last year. Of these, over 1.21 lakh are deaths linked to the virus and around 5.82 are active cases.

However, experts have warned of a possible spike in the next few weeks and months, as large swathes of the country battle air pollution and winter.