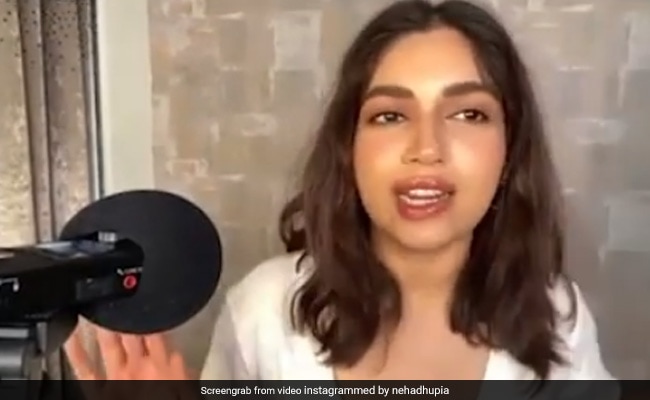 Bhumi Pednekar in a still from Instagram video (courtesy nehadhupia)

Bhumi Pednekar joined Neha Dhupia for a recent episode of her talk show No Filter Neha and was her usual no-filter self. Glimpses of the talk show have been shared by Neha on her Instagram but fan-clubs of Ranveer Singh have singled out certain portions of the show – in which Bhumi talks about Ranveer – and made then go viral. Bhumi is particularly trending for her alternate career suggestion for Ranveer Singh. In a certain segment on the show, Neha asked Bhumi to name celebs who would be good at certain offbeat professions. Bhumi thought Ranveer would make a great sexologist, as she said: “I think he’ll have some great hacks.” LOL. According to Bhumi, Sidharth Malhotra would make a great gym instructor while Kartik Aaryan would be good at giving non-stop “gyaan.”

Here’s what Bhumi had to say about Ranveer Singh:

Who would be good at these particular professions.

Bhumi: I think, Ranveer. I think he will have some great hacks. pic.twitter.com/KwOruZqO0v

Ranveer and Bhumi were both launched by production house Yash Raj Films. While Ranveer made his debut with Band Baaja Baaraat in 2010, Bhumi stepped into Bollywood with 2015’s Dum Laga Ke Haisha. Talking about being in an audition with Ranveer once, Bhumi said on the show: “It was great fun yaar, his energy was just amazing. I was blown away. I was so intimidated by him because I was like, my god what a fantastic actor and what energy.”

“It was great fun yaar, Ranveer’s energy was just amazing, I was blown away. I was so intimidated by him because I was like, my god what a fantastic actor and what energy. From whatever I’ve heard from Shanoo he is as authentic as it gets.” – Bhumi Pednekar on Ranveer’s audition pic.twitter.com/kUYb6WdQFD

Here are more glimpses of Bhumi Pednekar’s no-filter self:

Bhumi Pednekar was last seen in Bhoot – Part One: The Haunted Ship. Her new film Dolly Kitty Aur Woh Chamakte Sitare releases on Netflix on October 4, in which she co-stars with Konkona Sen Sharma.

Watch: How To Make Kutchi Dabeli – Popular Street Food Of Gujarat And Mumbai – From The Scratch (Recipe Video)