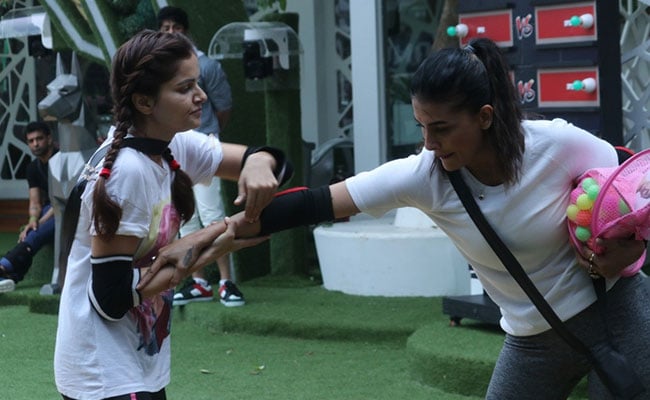 Bigg Boss 14: A still from the show

Thursday’s episode of Bigg Boss 14 was an interesting one. It began with Nikki Tamboli refusing to do household chores and continued with a rather competitive task and ended with the seniors having fun in the pool. Nikki claimed that since she’s the only ‘confirmed’ contestant in the house, she has chosen not to do her share of work, which is chopping vegetables. This irked every other contestant in the house, especially Rubina Dilaik and Abhinav Shukla, who claimed if there’s no one on chopping duty, then lunch will not be prepared. Hina Khan tried to make Nikki Tamboli understand but she was adamant. Rubina Dilaik asked Eijaz Khan to help with chopping but he refused which led to a fight.

Next up, Bigg Boss introduced a rather competitive task – the housemates were to go in the garden area and participate in a ball collecting task. A game setting was placed in the garden area, which would throw out balls and a team of two opposing contestants had to collect them in a basket. The one with the more number of balls among the two in each segment was eligible to collect all their personal belongings from the BB Mall. While belongings of the contestant who lost would permanently be sent back from the BB Mall.

The first round saw Pavitra vs Rubina giving each other stiff competition. Towards the end it turned out to be a wrestling task of sorts with the two ripping at each other’s baskets. Pavitra won and broke into tears as she collected her belongings.

The second round was between Eijaz vs Rahul. Eijaz made a smart move and started pacing around the swimming pool. Despite Rahul’s trash talk and comments on his age, Eijaz did not lose his cool and won the task. The third round was between forever warring contestants Nishant and Shehzad. Nishant climbed onto a tree to save his collection of balls and received a warning from Bigg Boss. Shehzad, who hid his balls in the swimming pool, won the task.

Kareena Kapoor And Saif Ali Khan’s Loved Up Pic From Greece. Circa 2008