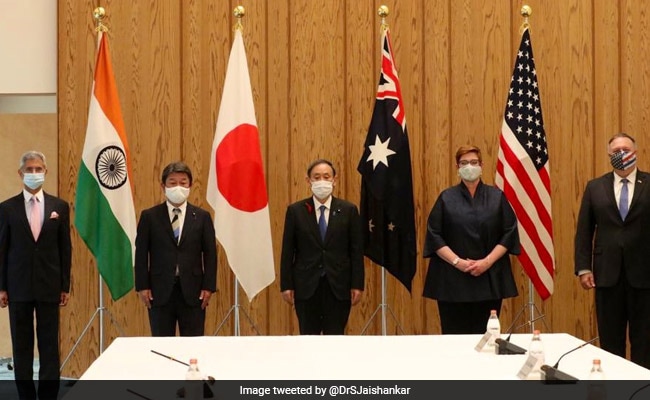 Foreign minister S Jaishankar today underscored India’s commitment to “rules-based international order, territorial integrity, sovereignty and peaceful resolution of disputes” at the meeting of Quad — four major Indo-Pacific democracies of India, the US, Japan and Australia. In the backdrop of the border dispute with China and the southeast Asian giant’s aggressive military behaviour in the Indo-Pacific and the South China Sea, the four nations re-affirmed the importance of maintaining a free, open and inclusive Indo-Pacific.

India, the minister said, remains committed to “upholding the rules-based international order, underpinned by the rule of law, transparency, freedom of navigation in the international seas, respect for territorial integrity and sovereignty and peaceful resolution of disputes”.

“Our objective remains advancing the security and the economic interests of all countries having legitimate and vital interests in the region,” Mr Jaishankar said at the meeting in Tokyo.

In today’s meeting, the four nations agreed to step up coordination in creating a free and open Indo-Pacific. The meet, hosted by Japanese Prime Minister Yoshihide Suga, was also attended by US Secretary of State Mike Pompeo and Australian Foreign Minister Marise Payne.

Mr Pompeo took a hard line on China, asking the Asian allies to unite against Beijing’s “exploitation, corruption and coercion” in the region.

It is “more critical now than ever that we collaborate to protect our people and partners from the CCP’s (Chinese Communist Party) exploitation, corruption and coercion”, he added, citing China’s actions in South and East China Seas, Hong Kong Himalayas, the Taiwan strait… these are just a few examples,” he added.

This is the second meeting of the Quad, formed in 2017 to cooperate on economic and regional security issues — which are topped by China’s growing belligerence in the region. The grouping has been denounced by China as one that hampers its growth.

For years, China has been involved in territorial disputes in the resource-rich South and East China Seas – an area said to have abundant reserves of minerals, oil and other natural resources.

Beijing claims sovereignty over all of the South China Sea in areas where Vietnam, Malaysia, the Philippines, Brunei and Taiwan have counterclaims.

In the East China Sea, China has territorial disputes with Japan.