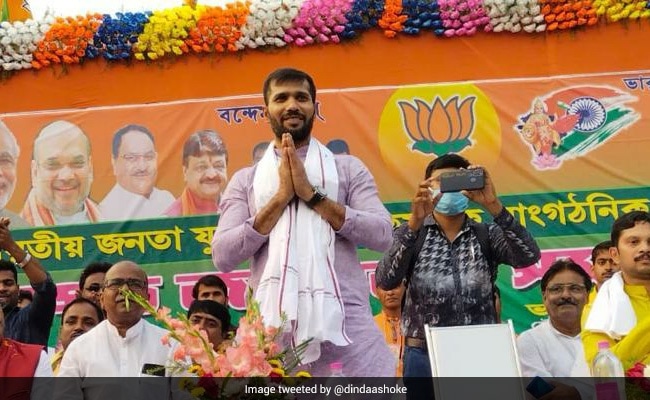 Ashoke Dinda has been campaigning for the BJP since joining the party.

Former cricketer Ashoke Dinda, who joined the BJP last month, will be its candidate from the Moyna constituency in West Bengal’s Purba Medinipur district for the state elections starting this month, the party announced on Saturday.

Mr Dinda was formally inducted into the party in the presence of Union Minister Babul Supriyo and state BJP vice president Arjun Singh at a public meeting in Kolkata and has been attending campaign rallies since.

The bowler had recently announced his retirement from all formats of the game. The pacer represented India in 13 ODIs and nine T20Is, picking 12 and 17 wickets respectively.

Mr Dinda’s induction into the BJP came on the same day that his teammate Manoj Tiwary joined the ruling Trinamool Congress in the presence of Chief Minister Mamata Banerjee.

The Moyna seat is held by the Trinamool Congress’s Sangram Kumar Dola who defeated the Congress’s Manik Bhowmik in the 2016 polls by almost 12,000 votes. He was named the ruling party’s candidate once again this time.

The BJP on Saturday released its first list of 57 candidates for the West Bengal assembly polls and fielded Suvendu Adhikari from his home turf of Nandigram, from where Trinamool Congress president and Chief Minister Mamata Banerjee has already announced her candidature.

Mr Dinda and ex-IPS officer Bharati Ghosh are among the BJP candidates, party general secretary Arun Singh said at a press conference, adding that it has given one seat to ally AJSU.

With this, the party has announced candidates for all but three of the 60 seats which will go to polls in the first two of the eight-phase elections to be held between March 27 and April 29.

“Jungle Raj” prevails in the state, and voters have made up their mind to oust the Trinamool Congress and elect the BJP to power, Mr Singh claimed.

Prime Minister Narendra Modi is set to address a rally in Kolkata’s Brigade Parade ground on Sunday, his first after the announcement of the poll dates.