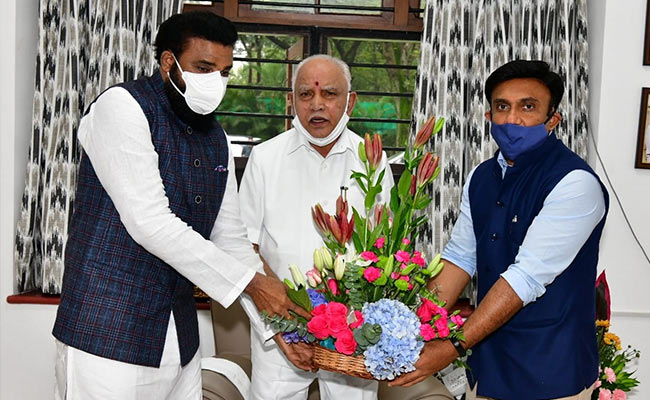 Dr Sudhakar has been given additional charge of the health ministry, a post that Mr Sriramulu had held.

Karnataka Chief Minister BS Yediyurappa’s office on Tuesday released pictures of the Chief Minister along with his two cabinet colleagues – Dr K Sudhakar and B Sriramulu. That would not be unusual in normal circumstances but the picture comes in the backdrop of a change in portfolios that saw Dr Sudhakar, a medical professional who was in charge of medical education, being given additional charge of the health ministry, a post that Mr Sriramulu had held.

Mr Sriramulu has been given the social welfare portfolio.

“Since I come from a medical background, technically speaking medical education and health should have been one single department like in all the states of the country. So I think the honourable chief minister understood the intricacies of having two different departments. It is practically not possible and the pandemic effort suffers. So in order to reduce and control the pandemic, this is the arrangement the chief minister has made in the interest of Karnataka,” Mr Sudhakar, who has been the face of the state’s Covid response for months, said.

Mr Sriramulu, according to some reports, is unhappy with the development. He even held a closed-door meeting with the Chief Minister on Monday, without speaking to the media.

But Dr Sudhakar denied the reports and told NDTV: “Absolutely there is no conflict. There is consensus among our senior leaders. The chief minister has given a very coveted portfolio to Sri Sriramulu, who is senior to me – with the social welfare department.”

This is certainly not the first time Mr Yediyurappa has faced cabinet-related issues.

In July 2019, when he took over after the collapse of the coalition government between the Congress and the Janata Dal Secular, Mr  Yediyurappa was the only member of the cabinet for weeks – at a time when Karnataka was facing severe flooding. He even visited Delhi to clear names to expand his cabinet but was then reportedly told by Amit Shah (who was then BJP president) to head back to the state to oversee flood relief.

Mr Yediyurappa also needs to accommodate several MLAs who had crossed over from the Congress and JD(S) – as a reward for helping him set up a BJP government. This, while making sure those who were already with the BJP did not get upset.

Several of the new BJP members did get berths; a few who did not win back their seats during by-election did not. Mr Yediyurappa has said that he would travel to Delhi again some days ago but that trip never materialised. This all feeds speculation that Mr Yediyurappa, despite being the first southern BJP chief minister and by far the biggest name for the party in his state, is not a favourite of his high command.

He does have one berth extra to manoeuvre with now – after C T Ravi quit as tourism minister after being given a central post.

The BJP is comfortable in terms of numbers in the Karnataka Assembly but the cabinet composition is being watched with interest.