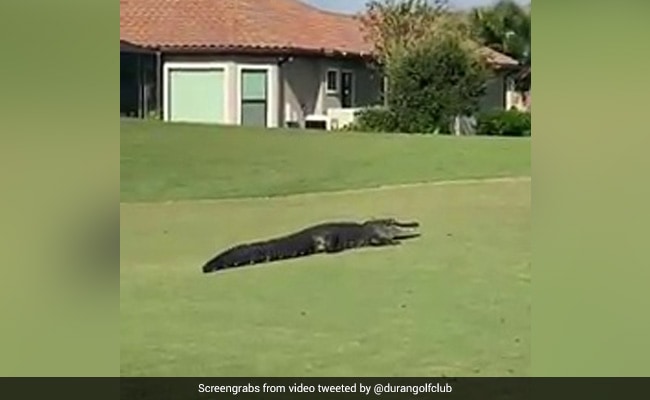 An alligator walks across a golf course in Florida.

Florida residents share their state with a sizeable alligator population – roughly 1.25 million, in fact. There are more than a few videos on the Internet that show giant gators chilling on Florida golf courses, on front porches, in rivers and swamps and several other places. And now, joining the long list of alligators on golf course videos is this jaw-dropping clip that shows a gator casually strolling across the fairway at Duran Golf Club in Melbourne.

According to news website UPI, the video was captured by Nicole Latner, an employee at the golf course. She spotted the gator on Thursday, coolly making its way across the greens between two lakes, and quickly recorded a video.

“Another day in Florida… wildlife on the golf course,” she can be heard saying in the clip which was posted on Facebook by the Duran Golf Club.

The video has been shared over 1,000 times on Facebook, collecting a number of amazed responses.

According to Ms Latner, there were golfers on the course when the gator made an appearance, but everyone maintained a safe distance from the predator.

American alligators are apex predators that feed on fish, reptiles, birds and small mammals. According to the Florida Fish and Wildlife Conservation Commission, alligators occur from southeast Oklahoma and east Texas on the western side of their range to North Carolina and Florida in the east.

This is not the first time that a gator has been spotted at a Florida golf course. An alligator, nicknamed Chubbs, is a regular at the Buffalo Creek Golf Course and makes frequent appearances there.