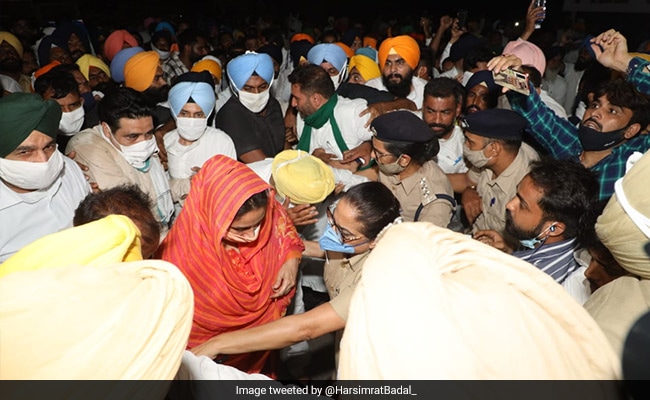 “We are being arrested for speaking out for the rights of farmers,” Harsimrat Badal tweeted

Former Union Minister Harsimrat Kaur Badal was arrested while trying to enter Chandigarh on Thursday night while protesting against the new farm laws, a matter over which her party the Shiromani Akali Dal decided to pull out of the BJP-led National Democratic Alliance.

“Arrested for raising farmers’ voice, but they won’t be able to silence us,” Ms Kaur tweeted.

“We are being arrested for speaking out for the rights of farmers, but we are pursuing the truth and our force will not be silenced by this force,” she tweeted.

Arrested for raising farmers’ voice, but they won’t be able to silence us.#IkkoNaaraKisanPyaarapic.twitter.com/zzFtt6TqqT

In visuals, the former Union Minister is seen surrounded by police personnel – all of them in masks amid the coronavirus crisis – as the Akali Dal leader’s supporters try to shield her.

The Akali Dal this morning began three separate “kisan marches” against the new farm farms, which they say will harm the interest of farmers and give room for large companies to manipulate them.

Akali Dal chief Sukhbir Singh Badal has been leading a march from Amritsar, while Harsimrat Kaur Badal came from Bathinda.

All the three groups intended to merge in Chandigarh, where they planned to give a memorandum against the farm laws to Punjab Governor VP Singh Badnore.

The Akali Dal, which was the BJP’s oldest ally, was the third major NDA member to pull out of the grouping after the Shiv Sena and the Telugu Desam Party (TDP).

Farmers fear the laws will end the price support system or MSP and drive the entry of private players who, they say, will put small and marginal farmers at risk.

Harsimrat Kaur Badal had resigned in protest as the bills were pushed through parliament amid a huge outcry by the opposition and a contentious voice vote.