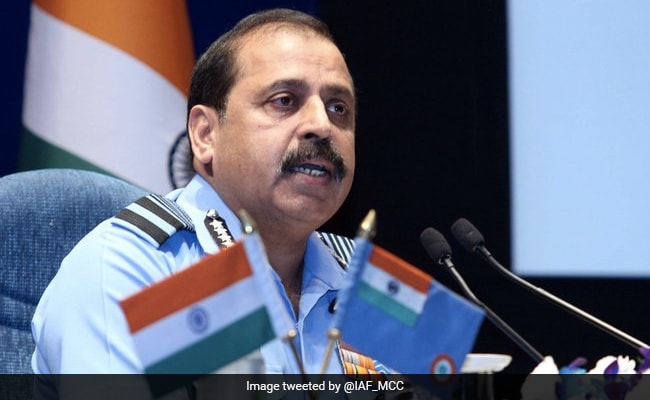 “We have made deployment in all relevant areas,” Air Chief Marshal RKS Bhadauria said.

The Indian Air Force is very “well positioned” to deal with any threat and very strong deployments have been made in all relevant areas considering the security scenario, Air Chief Marshal RKS Bhadauria said on Monday, referring to the border standoff with China in eastern Ladakh.

Addressing a press conference ahead of Air Force Day on October 8, Air Chief Marshal Bhadauria said Chinese air power can”t get the better of India”s capabilities but at the same time added that there is no question of underestimating the adversary.

He also said that the IAF is prepared to deal with a two-front war along the northern and western borders if such a scenario arises. “Be rest assured that we have deployed strongly to deal with any contingency,” the IAF chief said when asked about the situation in eastern Ladakh and possible threat from China in the region.

“We have made deployment in all relevant areas; Ladakh is a small part,” he said.

The Air Chief Marshal said the IAF is “very well positioned” to deal with any action along the northern border.

Induction of Rafale jets has given us an operational edge, he added.

India and China are locked in a five-month-long bitter border standoff in eastern Ladakh that has significantly strained their ties.

Both sides have held a series of diplomatic and military talks to resolve the row. However, no breakthrough has been achieved to end the standoff.

The armies of the two countries are scheduled to hold a fresh round of talks on October 12 with a specific agenda of firming up a roadmap for disengagement of troops from the friction points.

India has already deployed thousands of troops and heavy weaponry in the high-altitude region to deal with any eventualities.

The IAF has already deployed almost all its frontline fighter jets like Sukhoi 30 MKI, Jaguar and Mirage 2000 aircraft in the key frontier air bases in eastern Ladakh and elsewhere along the Line of Actual Control.

The newly inducted fleet of five Rafale jets has also been carrying out sorties in eastern Ladakh.

The IAF has also been carrying out night time combat air patrols over the eastern Ladakh region in an apparent message to China that it was ready to deal with any eventuality in the mountainous region.

Following the last round of military talks on September 21, the two armies announced a slew of decisions including not to send more troops to the frontline, refrain from unilaterally changing the situation on the ground and avoid taking any action that may further complicate matters.

The military talks were held with a specific agenda of exploring ways to implement a five-point agreement reached between External Affairs Minister S Jaishankar and his Chinese counterpart Wang Yi at a meeting in Moscow on September 10 on the sidelines of a Shanghai Cooperation Organisation(SCO) conclave.

The pact included measures like quick disengagement of troops, avoiding action that could escalate tensions, adherence to all agreements and protocols on border management and steps to restore peace along the LAC.