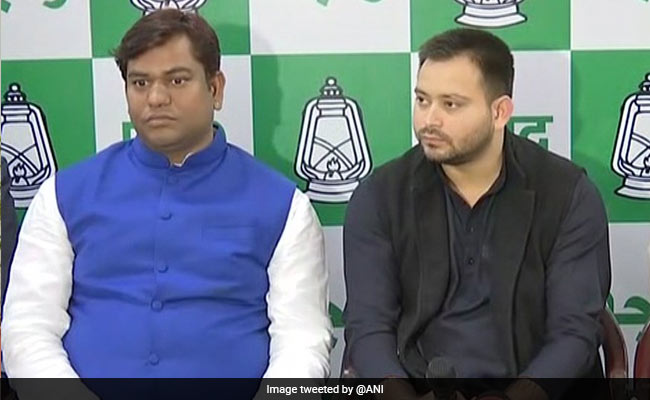 A day after exiting from opposition Grand Alliance in Bihar, former Bollywood set designer Mukesh Sahni-led Vikassheel Insaan Party (VIP) on Sunday announced that his party will contest all 243 assembly seats in the state.

The VIP chief claimed that his party will win assembly seats in good numbers and his support will be crucial for government formation as the party has 25,000-30,000 votes in each constituency.

“Given the multi-cornered fight, whoever fetches 35,000-40,000 votes will emerge victorious.

“I will be releasing a list of 71 candidates for the first phase of polls by 11 am on Monday, if talks with other other parties do not yield fruitful results for formation of a strong alliance to provide a better alternative to people,” Mr Sahni said.

Mentioning that he has kept his party’s doors open for formation of a bigger alliance in next 24 hours, Mr Sahni said that he is in talks with RLSP chief Upendra Kushwaha, Jan Adhikar Party (JAP) chief Pappu Yadav and other leaders.

The VIP leader said, this time, he would go in for alliance politics on his terms and conditions.

However, the VIP may not put up candidates in those constituencies where extremely backward class (EBC) nominees will be fighting on “ruling party’s (NDA’s) tickets”, he said.

Popularly known by the sobriquet “Son of Mallah”, Mr Sahni had on Saturday quit the Grand Alliance soon after the seat sharing deal was announced by RJD leader Tejashwi Yadav who did not announce the number of seats that the VIP would contest under the alliance.

The VIP chief had termed it as “betrayal” and said that it was an act of “stabbing in the back”.

Mr Sahni said that Tejashwi Yadav had betrayed the VIP even during 2019 Lok Sabha polls.

The VIP, which claims support among fishermen community, had been a coalition partner of the Grand alliance since last year’s Lok Sabha polls.

“We were again ditched after being promised 25 seats and the deputy chief minister”s post, if the Grand alliance emerged victorious,” he said.

At a press conference, Tejashwi Yadav had announced the number of seats assigned to the Congress, the CPI(ML), the CPI(M) and the CPI and disclosed that the RJD would get the lion’s share of 144 seats.

It was said that Lalu Prasad’s party would be accommodating JMM, its ally in adjoining Jharkhand, and VIP from its own quota of constituencies.

“Despite making a promise, Tejashwi Yadav took U-turn yesterday during the seat sharing announcement where the RJD leader not only announced the number of seats that the alliance constituents will be contesting but also gave the names of seats that Congress or Left parties will contest.

“It is a betrayal to the Nishad community to which I belong to and EBCs, Dalits should give him (Tejashwi) a befitting reply,” Mr Sahni said.

Noting that that he would not be able to carry along political activities with Tejashwi Yadav in future, the disgruntled VIP chief said, he can think of aligning with the RJD if its leadership is given to Tej Pratap Yadav “who is a nice person”.

Tejashwi Yadav should seek an “apology” for the mistake that he did, Mr Sahni said.

Voting for 243 assembly constituencies in the state will be held in three phases — October 28 (71 seats), November 3 (94 seats) and November 7 (78 seats). The counting of votes will take place on November 10.